I’ve had the skeleton of a lesson on standing waves in physics floating around in my brain for a long time. In the past, I’ve used just a white board and drawn some diagrams, and have occasionally shown some animations from the web to help students visualize the relationship between a vibrating string and the waves moving around on it.

Here was an attempt scanned from my first lesson back in 2006:

Nothing to write home about. My lesson had a bunch of information in it. Now in my defense, much of this I was eliciting from students. It was a very carefully designed progression of thoughts, and my students did end up understanding it well enough to then apply it to problems. (Better, in fact, than I was when I first tried to learn this in high school. This was one thing in physics that didn’t make sense to me, and I was committed to having my students get it.)

There wasn’t much for the students to grab onto or see – nothing dynamic or moving to engage them. The following year, I added some interactive applets, such as the one here. I didn’t have a class set of laptops, so it was still a demo at the front of the room, but here it was possible to show much more clearly what was actually going on and students themselves could play around with the applet and get some intuition for how it worked.

Fast forward to the present. I’ve been teaching a non-AP level physics class and have been able to write my own curriculum along the way. As a result, we’ve been able to slow down and play with models, do experiments and play with data. Waves are inherently hard to visualize given the frequency of the sound waves with which we typically interact (not to mention their invisibility) so I wanted to try something different. Kate Nowak’s recent post about using technology to do lessons that would be impossible also got me thinking how I could use the technology I have available to do this lesson in a fundamentally different way.

Here is what we did today:

First we watched this video on YouTube showing Tuvan throat singers in action. The kids had never seen this, and it shocked me the first time I heard it too back in high school during a class in electronic music. We also watched parts of the video of Daniel Palacios’ standing waves art piece (Thanks to John Burk, @occam98 for sharing this find yesterday!)

We talked a bit about how the singers might be doing this, but there was no consensus. So I brought them to the back of the room where we had a spring waiting for us on the floor.

I challenged two students to create a single wave with the spring bouncing up and down. This quickly devolved into attempts to make two, three, and eventually six loops in the spring. Hands-on discovery of the relationship between the number of loops and frequency? Check. I had students identify points of maximum amplitude and stationary points, but no vocabulary yet.

We then made our way to another station where I had set up a strobe light and some tuning forks. We played around with the tuning forks and the strobe frequency to be able to visualize the movement of the tines of the fork during vibration. I showed a similar demonstration with a student plucking a guitar string. Objects vibrating up and down in the same way as the spring create sound. Simple idea.

None of this is really revolutionary, I admit it. The good stuff is coming, I promise.

During a workshop I attended with Nick Jackiw on Geometer’s Sketchpad, I learned of a feature that I didn’t know about. With periodic functions, you have the option is to add an ‘action button’ to your sketch that allows you to ‘Play’ the function as a sound. In the previous class when we investigated superposition, we learned how waves added together, even those of different frequency.  I created a simple GSP sketch that added three waves together in which the amplitudes and frequencies could all be changed.

So…wave superposition – they could see it happening in front of them mathematically. Now they could hear the effects of superposition, changing amplitudes and frequencies, and understand how different frequency waves could add together to create the sounds that we hear. Standing waves are things bouncing up and down–> bouncing things up and down make sound waves –> we can also make sound waves by combining waves of different frequencies together.

The real key to making the final connection comes from applying some technology on loan from National Instruments. I have been working with their myDAQ student data collection device in finding ways to adapt it for use in math and science classes. The device has a number of analog and digital inputs and outputs, which are nice, but they pale in comparison with the Audio-In port in terms of ease of getting data into the computer. That data can then be analyzed very nicely by LabVIEW to create a frequency spectrum of the audio data in. I downloaded the software from an NI support site describing a beer bottle music project.

Now to lead up to the climax of the class  – I had a separate function generator create a 880 Hz sine wave which we played over the speaker. We had just seen a graph of this function, so students knew what it looked like graphically, and then what it sounded like. I had them whistle to imitate the frequency, and  now I showed them the graph of the amplitude vs. frequency plot in Labview, which looked like this:

I could change the pitch of my whistle and students could see how the peak moved left or right as the frequency went up or down. This was an easy introduction to the concept of frequency space and what it could be used for.

As with most of my classes, I’m the only one usually willing to sing in front of everybody, so I gave it a go:

A plastic bottle I had left over from the day before (though I kept this part to myself during class) was just asking to be played, and that gave some interesting results blowing lightly across it when it was empty…

…and more full than empty: (Look at those odd harmonics shine!)

What I liked the most about this activity is that we could pretty much put any sound the students wanted to make, and the frequencies would pop out as they did above. They could see how singing a note and changing the shape of one’s mouth changed the amplitude of the various harmonics associated with the sound, and that was what we were really hearing as different sounds.

This all  breaks down to what I think is the most challenging concept for students to really understand about standing waves: If the sound waves we hear are made up of all of these different frequencies (as shown by these graphs we generated in real time), then it means the objects generating those sounds (bottles, voices, strings, tuning forks) are somehow able to vibrate at a whole bunch of frequencies at the same time.

At what various frequencies does it then vibrate?

WHAT ARE THOSE FREQUENCIES IT CAN VIBRATE AT, YOU ASK?

Now we get to look at those diagrams relating length, wavelength, and frequency that used to show up at the beginning of my lesson before. Fifteen minutes at the end of class to find the frequencies of vibration for a string and a tube closed at one end – they figured it out pretty easily without much prodding.

This was NOT what I used to think a good physics lesson (or any lesson) needed to be: a series of presentations of content that made logical sense. Then we drill like crazy through problems to use the ideas.

Instead, we had a series of experiences that let the students interact in a visceral way with the material. Students could see waves and feel them. They could hear them. They could see what it sounded like when they were added together. They could observe how this new special graph took sounds in and spit back the frequencies of the individual waves that made them. I told them briefly about Fourier and showed them what happens when you play a triangle wave or sawtooth wave into the spectral analyzer – they easily saw the patterns of harmonics for each and (I think) had some intuition for what that meant. No need to have a bunch of theory first before seeing it in action.

I could not have done this with just a whiteboard. Or just a projector. The ease with which I was able to generate a frequency spectrum, create audible sine waves, model super position in a visible and tangible way – these were because of the convergence of technology in front of me. This is how technology is changing things as we speak – the tools to do these things are getting more and more easy to obtain by anyone. We have to get these tools in the hands of our students – they will run with it and get more out of it than we might even understand. We need to be there to guide them in the right direction – we need to help them decide from which parts of the fire-hose to drink.

This reminds me of two years ago when my dad was doing some data collection of sound levels near wind turbines in North-Eastern Ohio. He learned that there were already some applications available to do basic audio analysis on the iPhone that was similar to what the more expensive scientific equipment could do. That was two years ago. Now you can do this (from Faber Acoustical): 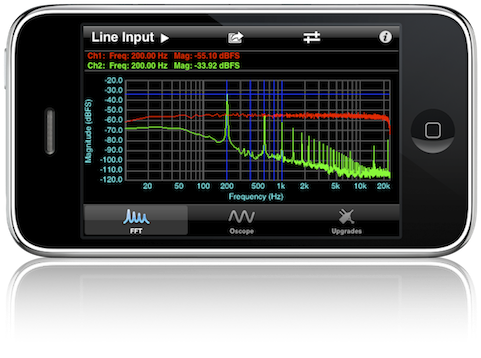 Fundamentals are still important. My students wouldn’t understand any of what we did today if they didn’t know what a sine wave is and what it means for a wave to have a frequency.

My argument is that we can bounce back and forth between theory and application. Let’s meet at a happy point in the middle where we can all do a big dance, capture it on video, and send it to YouTube. The whole “they need to understand the basics first” or “do their time” with the boring stuff argument is a hard one to maintain with these amazing tools available that used to only be accessible to universities and companies with deep pockets. Kids take to technology like ducks to water – using it to enable learning in an engaging and relevant way is one of the most powerful aspects of its presence in our classroom.

This lesson felt great today. I’ve always wanted to teach standing waves and show in depth what they are all about, but have never had the right tools at my disposal. This  is exactly the sort of style I want for all my classes – exploration and play that leads to a lesson that motivates itself. Ultimately I hope this lesson leads to a stronger connection and conceptual understanding of the material – they got it a whole lot faster than I did.

I hope that says more about them than it does about me….